It’s been two weeks since our research team met up in Gustavus Alaska to begin our 2015 field season. While Chris, Holger, and I have been working for over a year to get this up and running, our newly formed field team is reaping the benefits of hundreds of pages of proposals, permits, emails, and budgets. Now that we’ve made it to the island I can say wholeheartedly that ever word that was put to paper was worth it. Now, my four interns and myself, are trying to live up to the promises that got us here. 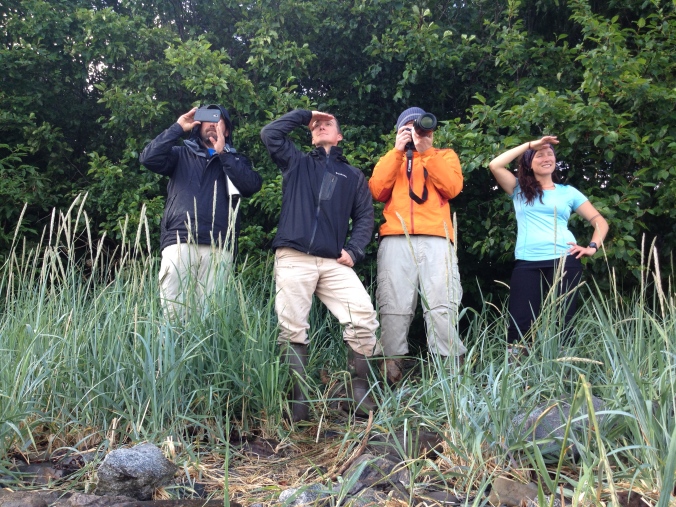 Our team is made up of a diverse group of undergraduates from Oregon State University, all whom I met when I was a teaching assistant for a field sampling class. We’re a diverse bunch to say the least, with complimentary skill sets, all of which have held us up through the rocky first few weeks of the field season (the first week of any large field season is a little rocky, this one is no exception). Everyone is expected to survey for whales from our 15-foot observation tower, and to listen for whales from our kayak, but other tasks have been divvied out according to desire and ability. Tom, our resident Texan, is quick with a joke or a story if you don’t beat him to it, and took up the bulk of our photography training. The plan was to use a spotting scope to photograph whales and seals across the survey area (a plan that regretfully doesn’t seem to work); when that fell through – much to Tom “I never stop working” Plank’s chagrin – Tom happily trained everyone up on ORCAA’s dream machine camera, and has personally taken over 500 photographs to date.

Kate, native Oregonian through and through, came with instruments in tow and cooking skills to match. Aside from her keen attention to detail and organization, having another woman in science around has turned out to be more important to me than I’d originally realized. Of my fifteen previous field technicians only once was there a gentleman on the team. Similarly, our deployment team for this project was made up exclusively of women as well. It’s refreshing to have Kate on the team, not just to represent ladies in science, but to share the perspective of being a strong undergraduate woman in science.

Lucas, recently dubbed “Pioneer Man”, is working on a senior thesis under my supervision. So in addition to his daily survey duties he and I have been brainstorming the next steps in his personal project. What we hope to do is to build on the legacy of acoustics work that’s been done in this area to see if humpback whales are using sound shadows to avoid being inundated with the noise produced by passing ships. This question, which was originally posited in the late 1980’s when the impact of noise on humpbacks in Glacier Bay became a topic of great concern, was addressed with a smaller population of animals and a quieter ocean. During our next stint Lucas will kayak throughout our survey area taking recordings in various spots that we will later quantify using acoustics software to assess variation in the noise levels as a function of ships. He will then use our visual survey data to map out how humpbacks are using the spaces during periods with passing cruise ships. He’s also fond of daily swims in the frigid 38 degree ocean, and holds a personal record of 13 minutes in the water (shoulder deep). This record was beat only yesterday by Kate and myself, the pioneer women on the team (who hold a 20 minute record, but only waist deep).

Lastly we have our Whale Whisperer, David. David, who is also doing a senior thesis with me, has an unbelievable talent for spotting whales. It didn’t take long before the student outdid the teacher; he’s now able to find whales further away and faster than any of us, for which I am grateful and admittedly humbled. His electrician skills have come in similarly handy as we stumble through an enduring love-hate relationship with power supplies. David’s thesis, which investigates diel trends in humpback whale vocal behavior, is going well. Thus far David has navigated the 3:30 AM surveys without complaint as the rest of the team snooze through the early Alaskan sunrises.

Our camp is set up and well organized. I’ve had to move my tent twice, both times due to the proximity of my sleeping quarters to bear habitat. Yes. We have bears. Up until a few days ago I’d grown quite comfortable with Teddi, our neighborhood black bear. She’d been a good neighbor, only coming around the beach twice a day to gaze from afar at our camp. When I interrupted Teddi eating salmon berries a few hundred yards away from my tent, however, I decided to move further into the spruce thicket. This morning David had a close encounter with a second bear on the beach, I’ve yet to see him, but unlike Teddi (who is a shiny black bear), Pete appears to be a large cinnamon bear (or possibly a small brown bear). We haven’t encountered Pete enough to determine a routine, but he hasn’t yet visited the camp.

We’re able to hear the whales breathing from our tents at night, and at least once or twice a day they’ve been swimming about 10 yards off of the beach, usually during high tides. It’s frequent enough that the team has coined the term ‘Drive By’ to describe it. We’re now familiar enough with the sound of breathing whales that not only can we tell which direction the whales are in, but also whether or not they are on our side of the channel or the opposite.

Also on the island we have humming birds and hermit thrushes, Swainson’s thrushes and crows, a pair of nesting bald eagles, and a colony of voles. The ocean is thick with harbor porpoise, stellar sea lions, and (Leanna you’ll be so pleased) with harbor seals!

Perhaps the best news of all? The whales are calling and the seals are roaring all around the array. We’ve yet to drop the hydrophone and hear nothing. When the hydrophone is near shore the roaring seals dominate, but when you drift mid-channel the swops and whups of whales can be heard. I couldn’t be more pleased.

There will be much more to come, including the trials and tribulations of our research (so many things that haven’t worked, so many things to carry up and down through the intertidal without breaking them), but for now I’ll leave you with the mental image of five happy, damp, researchers, watching whales from the shores of Glacier Bay. Signing off.

One thought on “Diving In”