(Warning: this is possibly a redundant post for those of you I’ve managed to email)

Another update from the bottom of the world.

We’ve departed the Jang Bogo research station with a considerably lighter ship! We unloaded countless shipping containers millions of gallons of fuel, enough food to feed a small army for years, and most of our passengers (including my favorite helicopter pilots).

We are now only seven passengers on this massive ship, with a crew of I think 35 to guide us through the Ross Sea. It is now that the actual science part of our cruise kicks in. Yesterday afternoon Jurgen (Geman geophysicist from KUM), Won Sang (KOPRI Chief scientist- geophysicist), and Sukyoung (KOPRI seismologist/environmental acoustician) and I assembled an ocean bottom seismometer (OBS) that will be deployed on the next leg of the trip (I’ll be gone by then). Today we assembled a 500m mooring that we will deploy first thing tomorrow morning. We conducted one CTD cast (to get info on the water column) at about 8pm and one more around midnight. Feeling science-y yet? Me too.

Because it’s 24 hours of daylight (bright as noon all the time) the crew is split into shifts, and if we’re willing we can do science in what should be the middle of the night, but looks just like early afternoon. We opted not to do too many middle of the night missions, but it blows my mind that we could. On board the R/V Araon we now get four meals a day. Breakfast at 7am, lunch at 11:30, dinner at 5:30 and ‘late meal’ at 10:00pm. Last night’s late meal was wonton soup in seaweed broth, and if I ever complained about the food on the ship I take it all back. It was excellent! I tried to convey my gratitude to tHe chef (one of my newest Korean friends on board the ship), but my Korean is still terrible. All I managed to say was thank you, and then bowed and smiled.

In less technical news I had one of the most amazing wildlife experiences of my life, though it will surprise you to hear that it was not with a whale but a seal! The seals here are extremely lazy, and hard to make move or even acknowledge the gigantic ship. They generally bask in the sunlight conserving energy (nice life). Because of this it’s fairly easy to walk across the ice and visit with them. Which of course we did as soon as we were able (no worries as a good ecologist I tried not to alter their behavior). Silly me forgot her camera (maybe better, the experience wasn’t about watching) but this seal was enormous! And although it didn’t move when it saw us it did something better… He began to vocalize.

Polar seals sound just like aliens (I’ve blogged about this before), it’s otherworldly. Typically they only make sounds in water but this seal starting singing/ringing/cooing on ice! It was the same type of sound I spent a year searching for when I was analyzing Arctic data but never got to see in person. To hear this kind of sound without a hydrophone, without a microphone, just to sit next to this massive seal and hear it ringing like a bell was the most amazing thing this acoustic ecologist could have possibly imagined. I nearly cried. 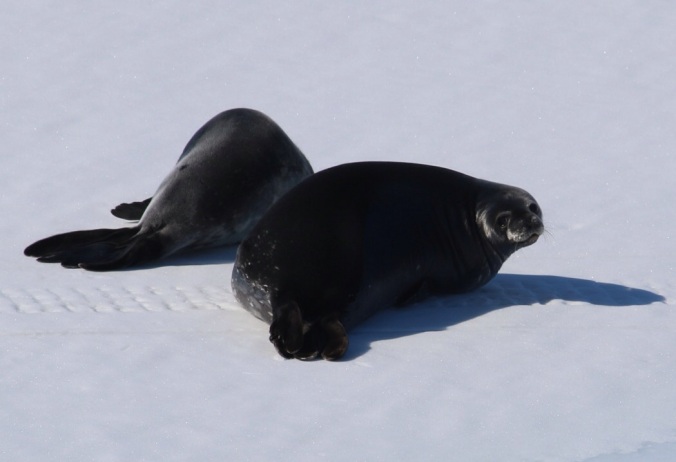 I did manage to make a recording of the call, but the quality is poor. I'll try and clean it up when I come home and get it posted for all the world to hear. Needless to say now I want to study polar seal communication, and the ecology of Antarctic pinniped species.

Thank you for your interest in Sound Science. Navigate throughout the site to find out more about our projects past and present. Thank you for your patience as we get our organization off the ground (and into the ocean) ~Michelle Fournet, PhD, Director